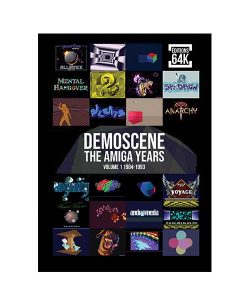 Demoscene the Amiga years reflects the making of the best demos as well as the history of the most emblematic and best known groups of the demoscene. Discover numerous pictures of demos through more than 450 pages as well as contributions of “sceners”. This book is the first volume covering the years 1984 to 1993 with about 90 demos amongst the most famous and popular ones. Discover the technical, graphical and musical evolution of the Amiga demos throughout the years, in Volume 1 (covering the period 1984-1993) with the most mythical ones of groups such as Kefrens, Silents or Sanity.

After an history of the origin of demos and demoscene, start with the first demos including The Juggler and Boing then follow the Megademos period with RSI – Alcatraz – Kefrens – Rebels. The first slideshow with J.O.E (Scoopex / Red Sector Inc.). The creation and history of Rebels group by one of its founder Static, the first Trackmo with Mental Hangover from Scoopex which will change the style of demos in the early 90s and the history of this group from 1988 until in 2000. An other surprise like Budbrain productions which won 1st place at Amiga conference in 1990 with its megademo which will repeat with Budbrain Megademo 2 and the feeling of Diablo one of members. Without forgetting Anarchy with the participation of some of its members such as DAN, 4Mat or Facet, and Razor 1911 with its demo “Voyage”.

The Norwegians of Pure metal code with their demo Alpha and Omega. Go to Hungary with the group Majic 12 and its Ray of Hope demo who will explain the conditions in which this demo was created. PGCS will tell you the story of the Odyssey demo and its 5 disks, an intergalactic epic that will take you to another demo called Hardwired, a Silents / Crionics production and the contribution of Jesper Kyd, Mikael Balle and Murphy.

Notify me when the item is back in stock.

Say “Boing” and fans of the Amiga think of the first demo, written in 1984 by Dale Luck and RJ Mical for a prototype displayed at CES, that used the machine’s unique hardware capabilities to create smooth animated 3D graphics with stereo sound. It was hugely important to the machine’s success, and captured people’s imagination – and a generation used the Amiga to express their creativity and ingenuity. The Amiga demoscene thrived and evolved, and this book chronicles many of the scene’s favourites from multiple groups through interviews with their creators: coders, producers, artists, musicians from many countries are included. 452 full colour gloss pages in a quality hardback binding.

There are no reviews yet.

Be the first to review “Demoscene the Amiga years vol. 1”

We use cookies on our website to give you the most relevant experience by remembering your preferences and repeat visits. By clicking “Accept”, you consent to the use of ALL the cookies.
Do not sell my personal information.
Cookie SettingsAccept
Manage consent

This website uses cookies to improve your experience while you navigate through the website. Out of these, the cookies that are categorized as necessary are stored on your browser as they are essential for the working of basic functionalities of the website. We also use third-party cookies that help us analyze and understand how you use this website. These cookies will be stored in your browser only with your consent. You also have the option to opt-out of these cookies. But opting out of some of these cookies may affect your browsing experience.
Necessary Always Enabled
Necessary cookies are absolutely essential for the website to function properly. These cookies ensure basic functionalities and security features of the website, anonymously.
Functional
Functional cookies help to perform certain functionalities like sharing the content of the website on social media platforms, collect feedbacks, and other third-party features.
Performance
Performance cookies are used to understand and analyze the key performance indexes of the website which helps in delivering a better user experience for the visitors.
Analytics
Analytical cookies are used to understand how visitors interact with the website. These cookies help provide information on metrics the number of visitors, bounce rate, traffic source, etc.
Advertisement
Advertisement cookies are used to provide visitors with relevant ads and marketing campaigns. These cookies track visitors across websites and collect information to provide customized ads.
Others
Other uncategorized cookies are those that are being analyzed and have not been classified into a category as yet.
SAVE & ACCEPT
Currency
EUREuro
AUDAustralian dollar
CZKCzech koruna
DKKDanish krone
NOKNorwegian krone
SEKSwedish krona
USDUnited States (US) dollar